A Complete Guide to Debate Writing 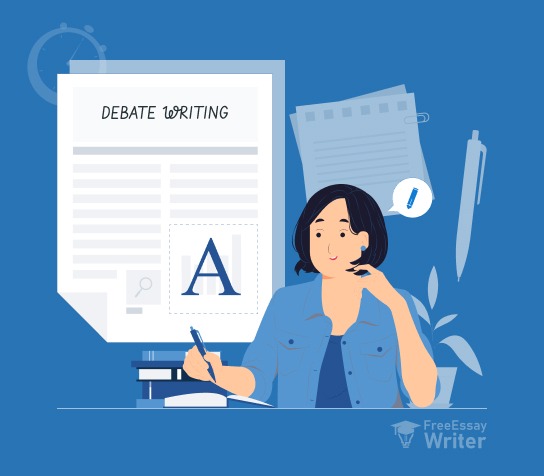 Writing a great debate paper can be difficult, especially if you don't know where to start.

Not sure how to structure your argument? How to find good sources? What the difference between an argumentative and persuasive essay is?

FreeEssayWriter.net is here to help. We offer a complete guide to writing great debate papers, from finding a topic to polishing your final product. Plus, our team of professional writers is available 24/7 to help you with any stage of the process.

What is Debate Writing

Debate writing is a type of essay that requires the author to present both sides of an argument in a thorough and logical manner. The goal is to make a case for one side of a debate while still acknowledging the validity of the other side's points.

A successful debate essay should be well-researched, balanced, and objective. In writing a debate essay, it is important to understand the different perspectives on the issue and choose one side of the debate to defend.

The author must then use evidence, such as facts or quotes from experts in the field, to support their argument. The essay should also anticipate and address counterarguments in order to strengthen the author's stance on the topic.

Finally, the essay should conclude with a clear summary of the argument and an assessment of the potential outcomes if one side or another is adopted.

Ultimately, debate writing can be an effective way for authors to present their ideas in a persuasive and engaging manner.

The Basics of Writing an Effective Debate

Being able to write a compelling and effective debate is a skill that will serve you well both in and out of the classroom.

But where do you start? Let’s take a look at some of the basics of writing an argumentative piece that stands out.

A quality debate requires thorough research. Whether it’s for a class assignment or for an extracurricular activity, make sure you are knowledgeable about the topic at hand.

Gather all your sources from primary documents to scholarly journals. Once you’ve gathered enough evidence and facts, use them to form your opinion and stance on the issue.

It’s important to know who your audience is when crafting your debate. Are they kids your age in class? A panel of judges? Or even a live audience? Consider their age group, background, knowledge level of the topic, etc.

When constructing your argument so that it resonates with them effectively. Knowing who you are talking to will help tailor the language and tone of your writing accordingly.

In any type of debate or argumentative essay, there is always going to be another side that opposes yours. It’s important to acknowledge their side as well as provide strong counterarguments against them in order to strengthen your own argument further.

When you write or speak, it is important to show that you thought about what other people might say. This shows that you are smart and have done your research. If you can think of good reasons why someone might disagree with you, it will make your argument stronger.

By following these steps and doing proper research into the topic being discussed, students have the capability to write debates that not only stand out but also present their beliefs effectively while considering other perspectives simultaneously!

The Different Types of Debate Writing

Debate writing is an essential skill for students to develop in order to become effective communicators.

Here are some of the most common types of debate writing, so you can get started on developing your skills.

The classic debate format is probably the most well-known type of debate writing. This style is structured as a back-and-forth between two teams on either side of an issue or question.

Each team takes turns making their arguments and presenting evidence to support their claims.

In the end, both teams take turns summarizing their points and offering counterpoints to the other team’s argument. This style of debate writing is best suited for topics that have two clear sides and a lot of room for discussion.

The Lincoln-Douglas style of debate writing is similar in structure to the classic format, except that it focuses more on ethical considerations rather than factual evidence. This style involves one speaker taking an affirmative stance while another speaker takes a negative stance on an issue.

This style is best suited for topics that involve complex ethical debates or moral implications.

This type of debate puts less emphasis on individual performance and more emphasis on collaboration between team members who must work together to present a cohesive argument backed up by facts and evidence from multiple sources.

With practice and dedication, you'll soon be able to confidently express yourself no matter what kind of debate you're asked to write!

Here is a quick outline to help you get started when writing any type of debate:

By following this simple outline, you should be able to create a structured argument no matter what kind of debate writing assignment you are given!

Tips to Make Your Debate Win Everyone Over

When debating, it is important to remember that you are not just trying to make your point known; you are also trying to persuade and convince those who are listening. To make sure you get the most out of your debate and ensure it will be a success, here are some helpful tips:

It is essential to do research and prepare beforehand in order to understand every aspect of the issue at hand. Acquiring knowledge on both sides of the issue will give you an edge as you can effectively counter any argument made against your claim.

Additionally, having a thorough understanding of the subject will help you craft a better argument as well as support your points with solid evidence.

When forming arguments, make sure they have a clear purpose and direction. Instead of making many small claims that may be difficult to follow, it is best to focus on fewer but more powerful points.

Additionally, each point should be supported with solid evidence such as facts and figures gathered from reliable sources. This will strengthen your argument and increase its credibility in the eyes of the audience.

While debates can become heated due to passionate opinions being voiced by both sides, it is important for debaters to remain respectful even when disagreeing with opposing views.

Maintaining professionalism throughout the debate conveys respect toward others and shows that you are confident in your position without resorting to personal attacks or insults.

It is important for debaters to consider other perspectives in order for their discussion or debate to reach a successful conclusion. Debates should strive towards finding common ground between opposing views rather than escalating differences between them.

Remembering this will help create a healthier dialogue between participants, leading them closer to finding solutions or reaching an agreement without straying away from the topic at hand.

As with anything else in life, practice makes perfect! Practice delivering your speech aloud several times before actually presenting it so that it flows naturally when spoken instead of sounding rehearsed or robotic.

Practicing also helps mitigate any anxiety or stage fright prior to an actual debate performance by allowing speakers time to get comfortable speaking publicly about the issue at hand.

Finally, practice makes it easier for debaters to think on their feet when faced with unexpected questions or counterarguments during a live event!

It's important to remember that there are certain debate writing techniques that should be avoided in order to write an effective argument.

Let's take a look at the different types of debate writing techniques to avoid.

One of the biggest mistakes you can make when it comes to debate writing is making false assumptions or baseless claims.

It's important to back up your arguments with facts and evidence in order to be taken seriously by your opponents.

Making false assumptions can make you appear uninformed or inexperienced, and could potentially harm the legitimacy of your argument.

Another mistake you want to avoid when it comes to debate writing is using ad hominem attacks against your opponents.

This occurs when someone attacks their opponent instead of addressing their argument directly. This often results in name-calling and personal insults, which will not help you win the debate or convince anyone of your point of view.

Instead, focus on presenting logical arguments supported by facts and evidence.

When debating an issue, it's important that you don't overgeneralize your points or make sweeping generalizations.

Doing so can weaken your argument and discredit its validity in the eyes of other debaters. Stick to facts and evidence whenever possible in order to maintain credibility during a debate.

Focusing Too Much on One Side of the Argument

When writing a debate, it is important to remember that there are two sides that need to be explored.

Focusing too much on one side will make it difficult for you to explore all possible angles, not just the ones that support your opinion.

It is important to consider both sides of the argument so that you can provide an unbiased view and effectively argue your point.

By following these tips, you can make sure that your next debate is interesting for everyone!

Here are some popular debate writing topics that you may want to consider:

By exploring all these topics at hand, you can create well-rounded debates!

Ready to make a powerful statement? Our team of experts is here to help you develop an argument that will leave opponents convinced.

We understand the importance of evidence when it comes to debates, so our writers work hard to produce content with credibility and accuracy.

But they don't just rely on facts—they skillfully select words tailored for precise meaning in order to bring even more depth to your topic's discussion.

With us, you get quality arguments that engage as much as they inform!

Dr. Barbara is a highly experienced writer and author who holds a Ph.D. degree in public health from an Ivy League school. She has worked in the medical field for many years, conducting extensive research on various health topics. Her writing has been featured in several top-tier publications.

Dr. Barbara is a highly experienced writer and author who holds a Ph.D. degree in public health from an Ivy League school. She has worked in the medical field for many years, conducting extensive research on various health topics. Her writing has been featured in several top-tier publications. 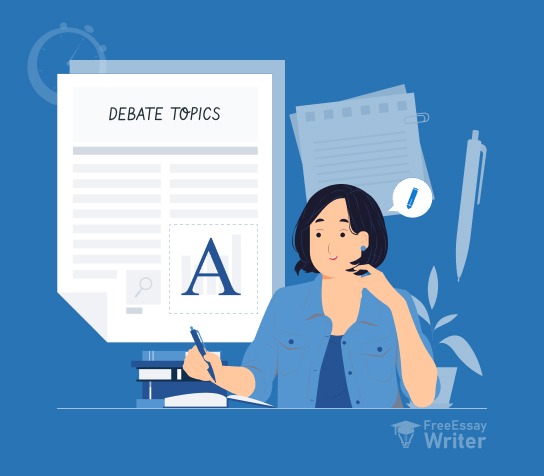